Governments trying to stay open to focus on basic services

As the health crisis continues to spread across the country, cities, counties, and states are trying to proceed as normal. Governments don’t go out of business. When disasters occur, it’s government agencies that have to respond. During the coronavirus crisis, health agencies, along with other emergency personnel, are once again on the front lines and stay on the job.

Governments don’t go out of business

But the nation’s 2.1 million federal employees at federal, state and local levels are slowly shutting down some of their operations, particularly those that engage the public directly. 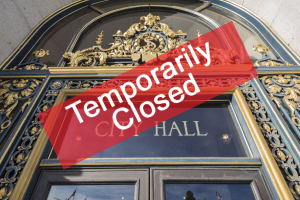 Many city governments are trying to stay open to focus on basic services and to care for citizens and employees, and city officials are taking extra precautions to limit interaction with the public.

Services and events that are on hold include jury trials, recreation centers, libraries and, in some cases, elections and government offices. Tens of thousands of schools around the country are now shut down.

By mid-March eleven states suspended or postponed their legislative sessions. In addition, the Missouri Senate and Ohio House have postponed their sessions. Other states, including Florida and Kansas, held sessions to pass budgets before allowing legislators to adjourn.

Most legislatures are allowing some staff to work remotely as local governments try to remain largely open for business.

In King County, Wash., which has been one of the communities hardest hit by the virus, numerous in-person services, like making property tax payments, licensing, procurement and in-person job applications and permitting, were closed with the hope of reopening by the end of March.

Most state’s departments and divisions of motor vehicles have remained open to the public.

Since being outdoors is safer than congregating in confined spaces indoors with groups of people, most parks around the country remain open. But indoor recreation centers — especially those that serve seniors — are closed in numerous jurisdictions.

The coronavirus has already disrupted campaigns around the country. It may have a permanent effect when it comes to candidates and sponsors of ballot initiatives who have to collect signatures to qualify for the ballot. In Utah, GOP gubernatorial candidate Jeff Burningham has suspended his signature-gathering effort. Dana Balter, a congressional hopeful in New York, has asked Cuomo and state lawmakers to lower the threshold.

“Part of campaigns is canvassing and door-to-door contact has been virtually shut down,” Diana Bray, who has until Tuesday to collect 10,500 signatures to qualify for the U.S. Senate race in Colorado. “Many people are refusing to hold the pen that others have held to sign petitions. Many ask if they can sign my petition online, which they cannot.”

As most local governments try to remain open to focus on services that help citizens, safety is key and decisions to close offices happen quickly so check the city’s website to stay up to date on closures.

Have you ever thought about the history of the job you hold or its job description?  For City or Town Clerks, it’s a long history and even long job description.

Since the beginning of time, there’s been someone whose job it is to keep track of the issues’ citizens face and their leaders’ response.  When early Americans were setting up local governments, settlers established the position of Town Clerk. The Office of Clerk was the first position colonial Americans established in the local government at Plymouth Colony. The city clerk’s role and responsibilities extended to being the recorder of appointments, deeds, meetings, and births, deaths, and marriages. The clerk was also responsible for overseeing elections.

Not much has changed for current City Clerks.

Early town clerks recorded the town’s happenings by memory and recited them at town meetings. Of course, City Clerks still use written and printed documents to record their town’s history and important records, but how they store those records and important documents are very different with the use of technology that’s faster, safer and more cost-effective to use, such as AV Capture All’s solutions.

Today, city, town and municipal clerks have become the hub of the government. Clerks stand as the local historian and remain a trusted link between the citizens and the government.

It has been noted that no other office in municipal service has so many contacts and responsibilities as the City Clerk. The position serves the Mayor, the City Council, the City Manager, and all administrative departments. The demands on a City Clerk require the person who fills the job to wear many hats and have awareness of many topics and issues. The position is central to pulling together all aspects of local government, including storing, maintaining and communicating municipal documents and records, fiscal records and vital records, and city business.

More specifically, City Clerks are the connection between citizens and the government by providing the necessary transparency of government records like public meeting agendas and minutes, to name a few.

When your job is to keep a city running, utilizing technology solutions that can make the job easier is essential.  AV Capture All has the solutions that help a City Clerk manage all their responsibility.

Our governance technology allows for City Clerks, who must collaborate with government staff members to set the agenda, goals, and objectives, to easily upload all documents.

As more and more businesses take health precautions for their staff and customers by closing, some Government offices might not be able to do that.  In Washington State where most of the deaths have occurred, the city remains open.

Washington Gov. Jay Inslee says mandatory social distancing measures may be required to stem the spread of coronavirus. “We may have to go to the next step and we are thinking about those seriously to get ahead of this curve,” Inslee said, adding that he would be meeting with state officials Sunday to discuss additional measures.

Asked if that could mean mandatory quarantines – like in Italy – or “shutting down” the city of Seattle, Inslee said not necessarily. But he did hint at requiring the cancellation of large events and other steps the public could find disruptive and restrictive.

For the proceedings that courthouses and City Halls must do daily, the business of the city goes on. There’s no reason for the work to stop when there are technology salutations to help.

As a country, we will be filling out the census in less than a month.  The results of this decennial census can mean millions in resources and representation in the courts and local government.

Data from the decennial census is used to determine how half a trillion dollars in federal funds will be distributed to state and local governments.

The results of the census will hold the keys to even more federal money – more than $675 billion per year that is distributed through scores of federal programs based in part on census population data.

Census data are used to fund multiple federal funding streams. In the fiscal year 2015, census data were used to determine the allocation of $675 billion for 132 programs, including Medicaid, SNAP, the Section 8 Housing Choice Voucher program, Head Start, and Highway Planning and Construction.

Federal funds are distributed based on annual population estimates. Census data are used to calculate the rate at which federal funds match state spending on programs including Medicaid, Temporary Assistance for Needy Families (TANF), and the Children’s Health Insurance Program (CHIP).

Many local governments, and even some private companies, have their own census turnout efforts underway.

The decennial census provides a uniquely comprehensive data source. Its accuracy affects not only political representation but whether adequate funding is disbursed to where it is needed the most in areas ranging from potholes to health insurance to education. The degree to which an inaccurate count will impact state and local finances, particularly an undercount of specific population groups, varies from one location to another depending on their characteristics and the federal programs from which they receive assistance.

For small rural cities that depend on Federal assistance, an accurate Census count is critical to provide the services on which residents depend.

“Every person in America deserves to be counted,” said Census Director Steven Dillingham.

Keep an eye out for your Census and fill it out completely.

Businesses all over the country are taking steps to keep their employees safe from the deadly coronavirus outbreak by allowing them to work from home. In the area hardest hit in the country, King County in Washington state, government buildings are doing the same.

The Department of Homeland Security has closed one of its facilities in Washington state and directed all employees to telework for two weeks in response to the growing threat of coronavirus in the area.

Acting DHS Secretary Chad Wolf ordered the closure of a federal building in King County, Washington, which began today. The office will remain closed for 14 days, and its employees have been directed to self-quarantine for two weeks, Wolf said.

The Office of Personnel Management is urging agencies to ensure as many federal employees as possible are prepared for telework, amid growing concerns over the spread of the coronavirus across the United States.

However, Courts and Legislatures may not be able to close because of a heavy docket load and schedule. Courthouses are some of the busiest buildings in every State and County and despite closures of other Federal agencies and buildings, justice centers may have to stay open.

“Every court is supposed to have an emergency plan. If you have an outbreak, there’s not time to be reading books and looking at your plan. You need to be doing that in advance,” said Former Ohio Supreme Court Justice Paul Pfeifer who now heads the Ohio Judicial Conference.

“We’re looking at what the Supreme Court has issued. We want to make sure the employees and the visitors in this building are safe,” said Administrative Judge Brendan Sheehan.