A mere six months after identifying the SARS-CoV-2 virus as the cause of Covid-19, scientists are on the precipice of having a vaccine to fight it. Moderna and Pfizer will be rolling out vaccines that could save millions of lives. On Dec. 10, the FDA will review Pfizer’s vaccine for emergency use. A week after that, Moderna will get reviewed. 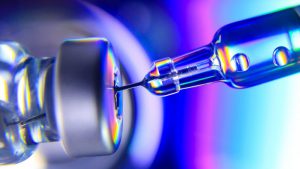 What makes that remarkable is under normal circumstances, vaccine approvals are measured in decades, not months.

The speed of vaccine approval is, in part, a reason why some Americans are unsure if they’ll receive the vaccine. The rollout has been haphazard and not traditional leaving many with questions and not a lot of answers.

One of the questions is: will businesses require employees to get vaccinated?

Will it be legal for your employer to require vaccination? University of California law professor Dorit Reiss who has spoken on legal issues surrounding vaccines since 2013 says the short answer is yes.

“Employment in the United States is usually ‘at will,’” said Reiss. “Your employer can fire you pretty much for any reason. They don’t like your shirt? They can fire you.”

This week the Department of Defense released images of what the COVID-19 vaccination record card will look like. The card will be proof of vaccination to keep in their wallets as part of Operation Warp Speed. Reiss said it will be legal for employers, businesses, or venues to ask for it.

These details, by all accounts, might not be answered until the new administration takes office in January.

A recent survey by MassINC, a Massachusetts polling group, found that Massachusetts residents are willing to take a COVID-19 vaccine. However, the study finds the comfort level varies across racial and socioeconomic demographics, raising further concerns about unequal immunization.

The survey of over 1,100 residents found that overall, 36% of Massachusetts residents said they will take it “as soon as possible,” and 47% plan to wait until either a few or many people have taken it. And just 7% of participants said they will never take a COVID-19 vaccine. However, questions about individuals’ preferences for when they get vaccinated revealed that Black and Latino’s respondents were less willing to do so right away.

The evolution of Americans’ decision to take the vaccine or not has been in play since Mid-August. At that point, 69% said they would get vaccinated as soon as a vaccine was available but two months later, it is was down to 58%. And there is a drop among Black Americans who say they’ll receive the vaccine as soon as it’s available.

The share of Americans who say they are likely to get a Covid-19 vaccine as soon as it’s available is dropping — and the decline is notably more pronounced among Black Americans than among white individuals, according to a new survey from STAT and The Harris Poll.

According to a new survey from STAT and The Harris Poll, 59% of white Americans indicated they would get vaccinated as soon as a vaccine is ready, a decline from 70% in mid-August. Only 43% of Black individuals said they would pursue a vaccine as soon as it was available, a sharp drop from 65% in mid-August. The poll, which surveyed 2,050 people online from Oct. 7 to 10, was weighted to ensure the sample was representative of the general U.S. population.

Overall, 58% said they would get vaccinated as soon as a vaccine was available when asked earlier this month, down considerably from 69% who said the same thing in mid-August. That change suggests growing concern that the regulatory approval process for a Covid-19 vaccine has been politicized by the Trump administration in the run-up to the presidential election.

“When we’re looking at the intersection of vaccine and politics, everything is exaggerated. It’s not just racial disparities, but health disparities,” said Rob Jekielek, managing director of The Harris Poll. “Black [individuals] are disproportionately less likely to be within 60 minutes of a primary care physician, which also means they’re less likely to get useful information and instead use a hospital emergency room as a primary mechanism for care. They’re also less likely to have insurance.”

The messaging surrounding the vaccines need to dramatically improve because of the need for more than one vaccination.

The CDC and doctors across the country recommend the double-dose shot as your best chance at protection and society getting back to normal.