As we look toward January 20, 2021, this country will have the first woman elected to the second-highest job in this country. Gender is not the only milestone for Kamala Harris, but she is among a demographic that is making big gains in local and federal government. 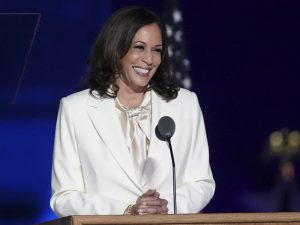 In 1917, Jeannette Rankin of Montana, was the first woman elected to Congress. Rankin had campaigned as a progressive in 1916, pledging to work for a constitutional woman suffrage amendment and emphasizing social welfare issues.

One hundred and three years later, a record-breaking number of women have been sworn in to Congress this week, including a historic number of women of color. There are now 144 women members of Congress, surpassing the previous record of 127. Of these lawmakers, 52 are women of color, which builds on the prior record of 48. Women comprise roughly 27% of all lawmakers, up from about 24% in 2019.

The harbinger of this might be the 2017 Women’s March that set the stage for the historic victories in state and local races that women in 2018, especially minority and LGBTQ women, scored. Numerous large cities now have a woman serving as mayor for the first time.

Polls have shown that women have become much more engaged in politics since the Trump inauguration, and that’s a good thing.

As of 2020, women make up 51% of the U.S. population but only account for 23% of Congress, according to the Center for American Women and Politics. Women make up 20% of mayors of cities with a population over 30,000 and 19% of the 100 largest cities in the United States.

While progress has been made, women continue to face barriers to getting elected to an office such as financial means and family responsibilities which make full participation in all levels of government more challenging.  For a woman to rise in the ranks in the federal government, which can take decades, she would need to enter Congress around 30 years old. And because of the incredible cost of a campaign, she would have to be in politics for several years before that to be able to raise the necessary campaign funds to compete. Many of the earliest women in Congress were independently wealthy and funded their own campaigns but none, however, became committee chairs.

Women’s political and socio-economic status improves when women become more involved in decision making and policy development at all levels of governance. However, women are underrepresented in most elected and appointed positions in local government in the United States.

Women are also underrepresented in important appointed positions in local governments, with little evidence of improvement over the last three decades. Of these, the city manager position stands out as particularly problematic. 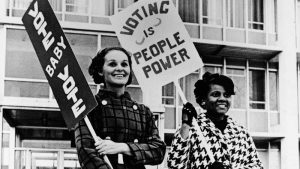 Chief administrative officers (CAOs) follow similar patterns: While the share has increased dramatically from 1.3% in 1974 to 14.4% in 2012–2013, women are far from parity in the position. While earlier work addressed women’s representation in the county supervisor position, which have broad powers and control local resources, we know almost nothing currently about women’s representation in these positions. Research on women in public service more generally argues that women face particularly high barriers when seeking positions higher up in the hierarchy.

For decades, the school board was the only option for women to join positions that held power. Women make up approximately 44% of school board members, which is far higher than any other major group of political leaders. That’s changing.

In 2018, more women were elected to Congress than at any time in our history.

“After this election season, the face of our politics will be changed for the betterment of our communities and our government,” said Higher Heights CEO Glynda Carr, in a statement. “Make no mistake: Black women’s energy, work and commitment to building a true democracy is continuing to diversify and improve America’s leadership.”

In a shift that was hard to predict even a few years ago is how much influence Black women would have n the last few election cycles. This voting bloc pushed Joe Biden, the Democrat’s candidate for President, to name a black woman to the ticket.

Black women’s overwhelming support for the Biden-Harris ticket—an estimated 90%—is the reflection of a decade of on the ground activism. Inspired by Harris’s nomination and election, women will continue to pursue their interests and ensure that their voices are heard.

For Black women, their voices have been getting louder and louder over the years. In 2008 and ’12, Black women voted at the highest rate of any race and gender subgroup. Their votes—96% of them—played no small part in the reelection of President Barack Obama in 2012.

And in 2020, this voting bloc elected the first Black woman to be the Vice President of the United States. An accomplishment that now makes possible the likelihood of a woman being elected President.